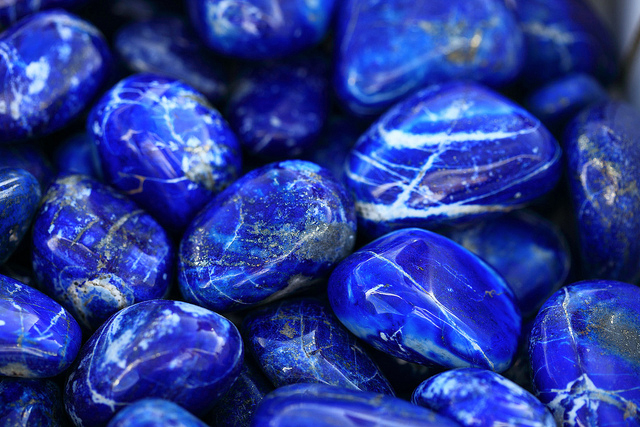 The bright blue hues with the occasional flecks of shimmering gold of the Lapis Lazuli stones have made it one of the most popular stones in history especially with royalty. It’s a universal symbol of truth and wisdom and has been since the beginning of mankind. Lapis Lazuli was highly coveted in ancient Egypt. Often used as decor on sarcophaguses,  scarabs, pendants and other jewelry or grounded into a powder to be used for dyes, make up, or medicinal elixirs.

Lapis Lazuli was used all over the world from ancient Persia to pre-Columbian America. It often represented the starry night and even served some as a protection stone from the evil eye. In Greek and Roman times it was used mostly as an ornate stone but in Medieval Europe it was believed to guard against dark spirits. It was ground and processed into the intense ultramarine colored paint often used by Michelangelo and the Buddhist believed the stone to bring inner peace.

Today Lapis Lazuli is often used to stimulate wisdom or intellect. It can also aide with problem solving and inspire new ideas. The stone is excellent for enhancing memory and creating a desire for knowledge, understanding, and truth. Lapis encourages honesty and brings harmony to all relationships.

Lapis Lazuli is a great stone to have in the workplace as it attracts promotion and lasting recognition.

Often used in Crystal Healing, Lapis Lazuli is most commonly used for issues pertaining to the throat, ears and nasal passages. Other uses include enhancing circulation and reducing vertigo and bruises. The crystal can be used to relieve pain especially migraines and reduce inflammation. Some believe the stone can aid the nervous system and brain disorders. Lapis can quickly release stress, which allows for peace and serenity within the self.

Lapis Lazuli is a crystal that promotes all aspects of truth. It presents one with truth of the inner self and acceptance of oneself. It brings relief to emotions that have been suppressed and releases long held grudges from within and allows self expression without fear or apprehension. It supports and encourages dignity within friendships and honesty and compassion when dealing with others. The stone aides with awareness of one’s beliefs, motivations, and gives them a clear image of the limitations and opportunities in their own lives.

In Meditation Lapis Lazuli is often used for the Third Eye and Throat Chakra. It can help align and balance these chakras to have a more clear understanding of thoughts, communications, dreams, ideas, and visions.