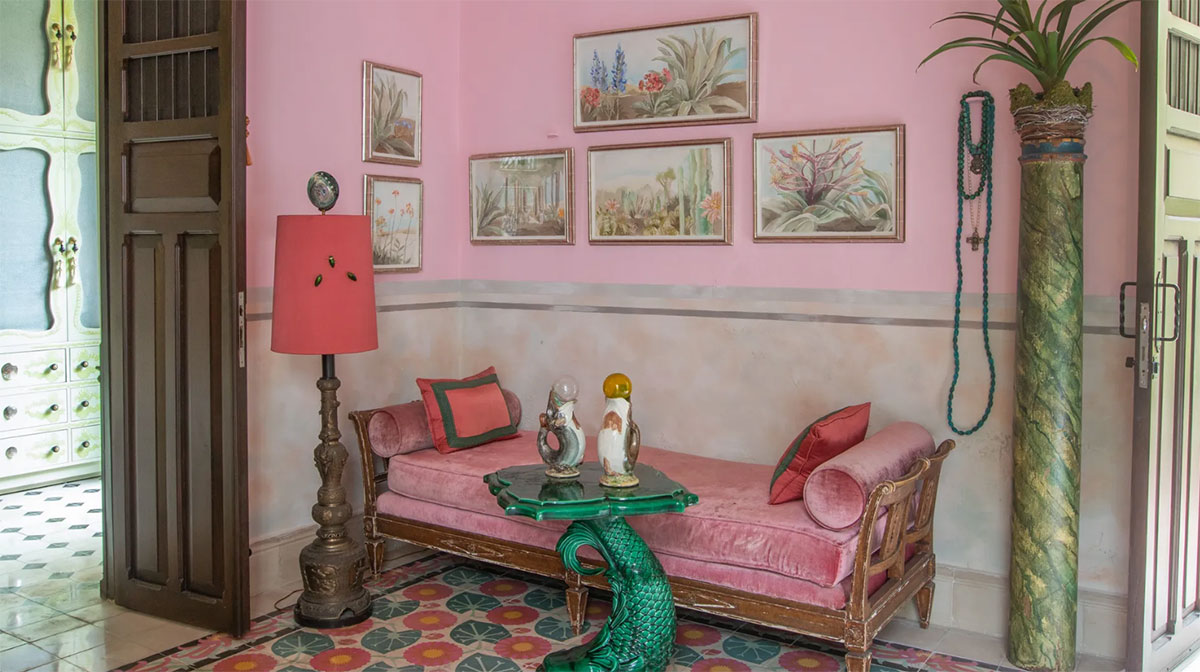 Decorator and product designer Marjorie Skouras is known for her unabashed embrace of color, so it’s no wonder that she would feel at home in the vibrant city of Mérida. Although the California native had been traveling to Mexico since the 1970s, she only discovered the capital of the state of Yucatán in 2015 through friends. “I knew within 40 minutes of arriving that this was the place for us,” recalls Skouras of the first time she visited the city with her husband, Bruno Bardavid. “We were ready to leave Los Angeles, and it had been my lifelong dream to live in a Mexican Colonial house.”

The couple wasted no time, eagerly snapping up a dilapidated 4,000-square-foot, three-bedroom 19th-century mansion in the Santiago neighborhood of Mérida’s Centro Histórico. “It was in need of a full restoration, but it felt grand, with an elegant layout and a pistachio green wedding cake−style façade that I fell madly in love with,” Skouras says. Luckily, many of the original details had been left largely untouched—including the stenciled-tile floors, which Skouras was particularly intrigued by, given that they aren’t usually found in Colonial architecture. “There’s a heavy Art Nouveau influence that you don’t often see here,” she adds.

A patio with a botanical scene painted by local artisan Miguel Rivero. Skouras designed the iron-and-marble table, the mirror, and the console. The chairs are from her line for Currey & Company.

The renovation would prove to be neither quick nor easy, thanks in part to a lengthy permit application process, made more complicated by the fact that the residence is considered a historical monument. (Parts of the home date back to the 1870s, meaning that any renovation work needed to be overseen by the local architectural preservation society.) “We weren’t allowed to make structural changes, so we were locked into the layout for the most part,” explains Skouras. One of the couple’s big wins was managing to relocate the kitchen and convert the existing kitchen into a spacious primary bath. “The bathtub was our first purchase for the house, and we ended up having to reconfigure the room to accommodate it,” says Skouras. Aside from a new roof and mechanical systems, other changes included creating a patio off the kitchen, installing a pool, and building a rooftop terrace.

Aesthetic details were painstakingly restored, such as rotted doors that needed to be reconstructed from tropical hardwood to match the original design. Notably, the wall decorations and floor stencils took an artisan a full year. “Bruno and I would peek into the windows of old ruined houses nearby to get ideas for elements that might have originally been in our house,” Skouras explains of their own process. At one point during construction, the roof over the primary bedroom fell in. What could have been a disaster actually turned out to be a blessing in disguise, as a subsequent storm ended up washing off some “terribly ugly” grape wall stencils that weren’t period-appropriate. Underneath these grapes, an Art Nouveau lily pattern revealed itself, coincidentally matching the new lily floor tile Skouras had previously selected for that room. “It was a magical moment,” she says. 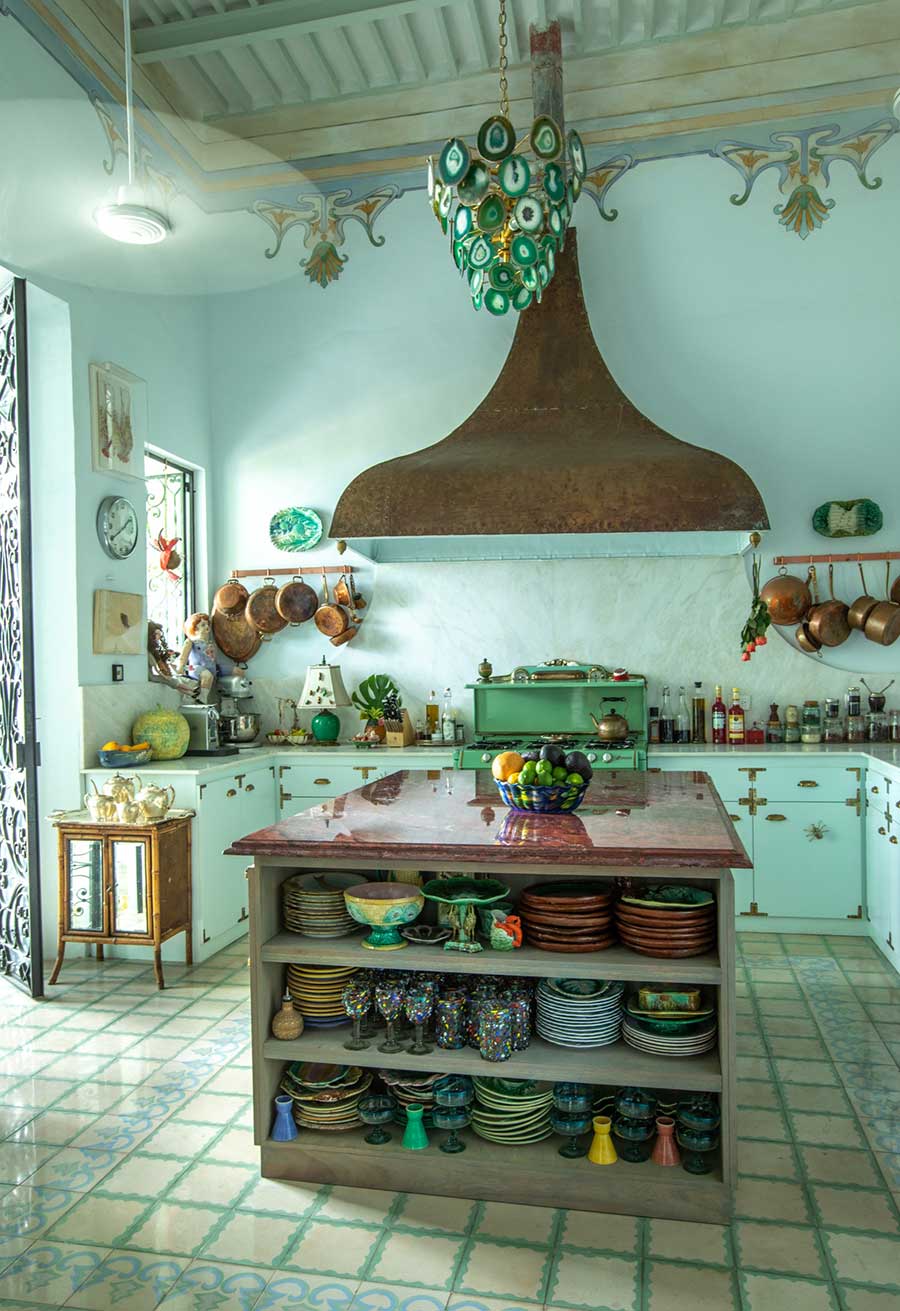 Although the kitchen was relocated to another area of the home, the copper vent hood is original to the house. Skouras designed new cabinetry and installed Calacatta marble countertops as well as a granite-topped island. The green agate light fixture was also designed by Skouras.

When it finally came time to decorate, Skouras didn’t hold back, splashing the walls of each room with a different shade found in the original stencils. “I am mad for color,” says Skouras, “and you have unbridled license here in Mexico.” The furnishings are an interesting mix of her own furniture, mirrors, and lighting along with many vintage pieces and antique finds. “I had amassed a collection of furniture in Los Angeles that I realize now was always meant for my fantasy life in Mexico,” says the designer. “There are some fabulous things, and then some items that I found on the street and spray-painted gold or white.” (Skouras’s signature style has trickled across the street, where the designer’s new studio, boutique, and photography gallery, La Malaquita, is housed in another renovated Colonial manse.)

Once the house was complete, the true test came when the previous owners—three sisters, who happen to be descendants of the former Yucatan State governor General Francisco Cantón Rosado—visited the newly renovated residence. “One of them started to cry when she walked in,” recalls Skouras. “They shared their family stories with us, and we have become friends as a result. I feel grateful every morning to be living out my dream.”